Whether you’re a fan of basketball or not, you’re going to hear about Kobe Bryant a lot this week. Especially today. You’re going hear career eulogies, speeches, blogs, and interviews. If you think it’s gone too far, then this post is for you.

If you feel that there’s more to life than basketball, then this is especially for you.

I mean, of course, we all know you’re right. But this is exactly what this Kobe Bryant retirement is about: something MORE than basketball. We’ll let the analysts decide where Kobe stands amongst the greatest. It’s been a while now since we’ve stopped caring here in LA. We know what he means to US.

For me and millions of others who literally grew up and came of age during the Kobe Bryant era, Kobe was as much a part of life as the seasons, the California sunsets, death, love  and taxes. I know it sounds a bit dramatic but when the sun goes down tonight, a monumental part of our youth will be settling into the night as well.

When Kobe came into the league, I was a 12 year old kid. Not even a teenager yet.  At that young age, my immediate surroundings were the whole world, and to us, the only world that mattered was that smoggy yet picturesque strip of hills, concrete, and trees that adorn the land between the Pacific Ocean and the San Gabriel Mountains.

For some perspective, when Kobe played his first game in a Laker uniform, Tupac Shakur was still alive. Back then, it was Tupac who represented the city’s grit and determination. In retrospect, it’s fitting that the same year Tupac died was the same year LA would get it’s next icon that would soon carry the torch in representation of the city’s strength, grit, and passion.

For Perspective: This is what the LA Times website looked like when Kobe came to the Lakers:

“To Live and Die in La, the place to be, you have to be there to know it.” -Tupac Shakur

Yup, you had to be here to know it.

Growing up in LA during the Kobe Bryant era, April meant one thing: Playoff season, the “real” season and another road to June was about to begin. The nights get warmer, the days get longer, and the gold Laker car-flags would one by one start to make their way out, adding a hue of purple and gold to the sea of red brake lights that made up our never ending web of freeways.

When playoff season came, EVERYTHING was possible, and for some reason, there was something really magical about playoff games on Sunday afternoons.

The first Kobe-Shaq championship wouldn’t have happened if it wasn’t for a 4th quarter, 15 point come back that ended with the now iconic lob from Kobe to Shaquille to pretty much seal our first trip to the NBA finals since 1991. Happened on a Sunday. I’ve never lost my composure/dignity as much as I did when Shaq nailed down that lob.

The 3 peat wouldn’t have happened if Robert Horry doesn’t sink that buzzer beating 3 against the Sacramento Kings on a Sunday afternoon game that the Laker’s never led until the end.

A Sunday after that, the Lakers would defeat the Sacramento Kings in Sacramento during a game 7 for the ages.  The fact that I was in the Sacramento area with my friends on a class trip made that game even MORE memorable.

During the lean years of struggle after Shaq Left, Kobe reminded us once again that anything is possible with a buzzer beating shot against a heavily favored Phoenix Suns that would give the Lakers a 3-1 lead. Something about Sundays.

The 81 point game against Toronto? Sunday.

After a few tough years, the Laker’s returned to Championship glory when the Lakers clinched their first post-Shaq championship in Orlando. Another sunny Sunday afternoon in June.

Game 2 of that series was extra special as I got to watch the game in person with my dad as the Lakers defeated the Orlando Magic led by Courtney Lee* in an overtime thriller.

(*not sure if it was Courtney Lee…was there someone else playing on that team? I don’t remember.)

But the biggest, most joyous moment of the Kobe Bryant era would happen on a Thursday.

Trailing 40-34 at half time in a sloppy, tense, nerve-wracking Game 7 against the hated Boston Celtics, the game was starting to appear out of reach. Somehow, it was the team gathering together behind the man that got them there.

We haven’t had one of those moments for a while now.

But we will never forget where we were when those moments occurred.

Being a Laker fan means that a game is never over until time runs out. While watching the Lakers take on the Spurs during the 2004 playoffs, I was in a room full of Spurs fans who were celebrating and heading to their cars after Tim Duncan sunk the apparent game winner, leaving less than half a second on the clock. I’d been a fan long enough to know that it’s never over. Not with this team at least. 0.4 seconds. We will never forget. Rumor has it my Spur fan friends are still in the parking lot waiting for me to come out of the Chilis Restaurant after Derek Fisher sunk that shot.

Now we watch new guys and new teams craft their own legacies. But we still have unending memories available with a quick youtube search.

THE KOBE BRYANT STORY IS A STORY OF LA.

For those of you not from here, there are two LA’s. The LA made up of adopted angelenos that could afford to move here (celebrities, dreamers, other suit wearing rich folk), and the native angelenos that are FROM here (the batos and homies that won’t let a championship celebration get in the way of copping a free pair of Jordan). The transplants are the ones you see sitting in the lower bowl of Staples Center. The natives usually sit in the upper levels save for the rare occasion where ticket prices are low due to playing against lowly teams like the Bobcats or the Clippers (no offense to the Bobcats).

But that’s the thing about LA. It’s a very receptive and accepting place. No one thinks twice about seeing an asian, a hispanic, a white guy in a suit, and an african american waiting in line behind a food truck that makes Korean-Mexican Hybrid Tacos.

In LA, you’re from here the moment you get here, whether by birth or by choice. In 1996, Kobe Bryant got here by a choice made by Jerry west. HE would become as much a part of LA as the  celebrities sitting courtside and the homies in the top levels trying to spy an empty seat in the lower bowl that we could sneak to during halftime.

As a young immigrant kid who still had hints of an accent, playing and watching basketball is what allowed me to seamlessly weave my own unique identity into the endless sea of LA diversity. None of our differences mattered when the Lakers were playing. Or when you were sharing a copy of the LA times with a stranger on a bus stop reading Bill Plaschke’s over the top commentary from the night before.

Whether shooting around at the park in a Laker Jersey, or waiting in line for yet a second round of hybrid tacos, none of these socio-cultural divides meant anything to us.

It’s rare for a 16 year old teenager to have much in common with his 12 year old sister and cousins, but because of the Lakers we were able to share a strong bond that continues today.

The Laker Era represents all those memories of days where everything was possible, specially on a Sunday afternoon.

In the past twenty years, a LOT has changed. Friends move away, neighborhoods have changed.

I too have had to move away from the city of angels and as painful as it is to see your childhood evaporate, we could always count on one Kobe Bryant putting on a show regardless of the season that the Lakers could be having. Through Junior High, High School, College, Marriage, living in Canada, and now living in Texas, Kobe Bryant was the constant that kept me connected with my roots.

But I understand.We need to understand, that we’ve been on borrowed time. The Kobe Bryant “Black mamba” era really came to an end the night that Kobe’s achilles tore.

The final Mamba legacy was signed with those two free throws he made on one leg following the fall. He singlehandedly took an epicly disappointing Laker team to the playoffs but it came at the expense of his achilles heel.(As a side note: F*ck Dwight Howard)

You have your living legends, but for the last three years, we got to have a living legend who was also playing. The last few games may have seemed like a circus, but really, it was more like a traveling museum.

When you watch highlights in the future, or see the statue next to staples – or when he gets inducted into the hall of fame, we’ll give anything for a chance to travel back in time and see him put on jersey one more time. Tonight will be that one more time.  One last chance to say goodbye.

I bought tickets to a game this past November, and luck so had it that Kobe announced his retirement about an hour after I bought the tickets. I think the basketball gods rewarded my dedication as a fan over the past few years by allowing me to get a part of Laker history in the form of the retirement letter from Kobe that the Staples crowd received that game. 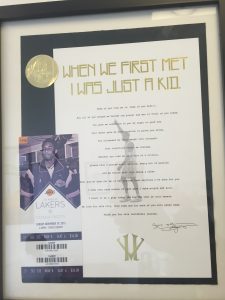 Of all the glorious moments I mentioned in this post, this one will forever be my personal favorite- Getting to bring my 3 year old son to his first basketball game. He won’t remember any of it, but he’ll be able to tell his friends that he saw Kobe Bryant play in his last season.

He’ll probably grow up rooting for D’angelo, Clarkson, and Randle.There’s no telling the joys that lie ahead for him in his own adolescence as a sport fan. Despite the dimness of tonight, the future’s looking bright.

But until then, we’ll always have these 20 years,  and as of right now, we have this for one more night.

I don’t know what I’ll feel tonight when the final seconds of the season tick down, when this game is in the refrigerator, the lights go out, and the tears start streaming- All I know for sure right now is this:

Welcome to NahumGald.com. The digital home for all of my projects, art work, and blog posts. 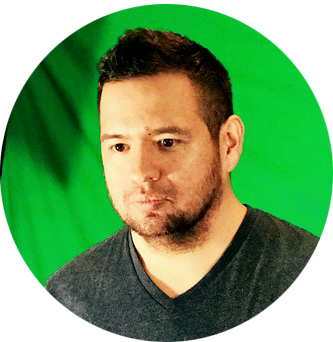 GaldaMedia is a digital marketing agency that helps brands or individuals build the digital infrastructure necessary to operate in the current landscape. Visit GaldaMedia.Com for more information

KeeVee is a startup dating app that uses real-life events to create connections. KeeVee soft launched at SXSW 2017 and is currently under redevelopment